It was Lot 8 CALL HER NOW who topped proceedings when realising £240,000 to Rahinston Stud. It was Andrew Hickman who struck the winning bid on behalf of the successful purchaser to see off underbidder Gordon Elliott. The daughter of PRESENTING offered by Cormac Doyle's Monbeg Stables won her Maiden point-to-point at the first time of asking and is a three-parts sister to the great DENMAN. 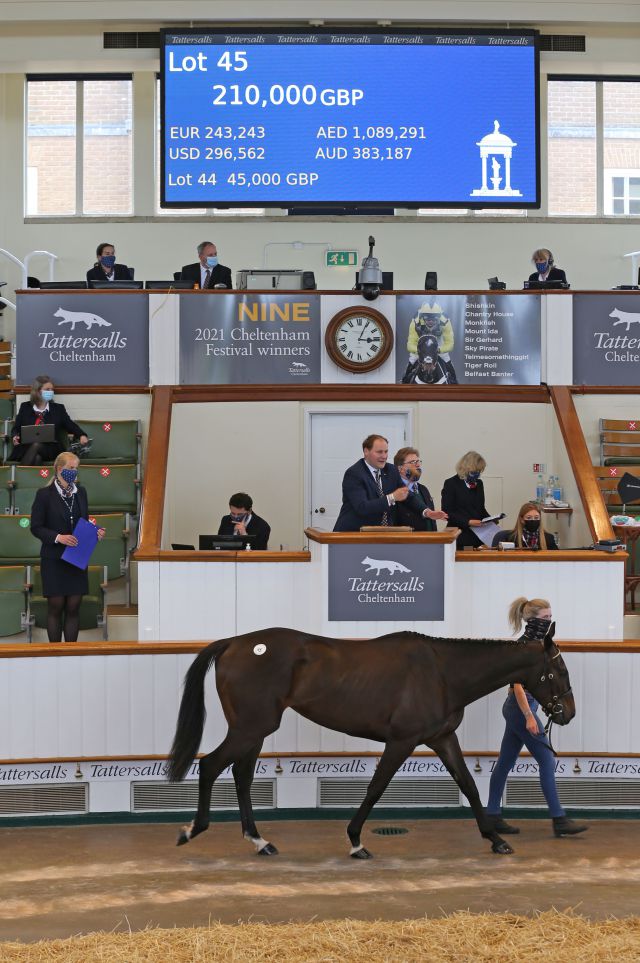 Lot 45 CITY CHIEF offered by Denis Murphy's Ballyboy Stables caught the imagination of a number of different bidders but it was David Minton of Highflyer Bloodstock standing alongside Nicky Henderson who struck the winning bid of £210,000. The four-year-old son of SOLDIER OF FORTUNE was an impressive winner of his Maiden point-to-point at Tralee only last Sunday.

Lot 24 TIMEFORATUNE was the 11 length debut winner of his bumper at Ffos Las for Brian Eckley, who also owned and bred the son of YORGUNNABELUCKY. The gelding had many admirers with a number of bidders making a play for the horse in the ring but it was David Minton of Highflyer Bloodstock who again brought down the hammer at £175,000.

Lot 26 PIMLICO POINT ran out the debut winner of his four-year-old Maiden point-to-point at Ballindenisk in taking style and it was Kerry Lee who signed the docket at £160,000 for the son of FLEMENSFIRTH. He boasts a strong pedigree being out of a Grade 1 winning mare and from the family of MODULE.

Matthew Prior, Head of Sales, commented;

"The Cheltenham May Sale brings to a close what has been a challenging season for the point-to-point sector on a high note. The handlers have continued to show great resilience in adapting to a disrupted racing and sales calendar as a result of the pandemic and it has been hugely satisfying to see their efforts rewarded at our recent sales held here in Park Paddocks, Newmarket. The hallmark of the Spring sales season has been the sustained strength and depth at every level, as witnessed by the exceptional clearance rates of 93% or more at our last three sales. To have sold the two highest priced point-to-pointers at public auction this May underlines the confidence purchasers have in the Tattersalls Cheltenham sales regardless of the location. This year has been spectacular for Tattersalls Cheltenham graduates as highlighted by the nine winners at the recent Cheltenham Festival and we look forward to our sales returning to Cheltenham in the not too distant future."