The Tattersalls Cheltenham Sales returned to Cheltenham Racecourse for the first time since the COVID-19 pandemic producing a record breaking renewal. A blockbuster session in a packed sales ring witnessed a total of 50 Lots sell for £4,288,500 at an average of £85,770 with an impressive clearance rate of 93%. Indeed the gross turnover is a world record for any select point-to-point sale ever staged, with 14 Lots realising £100,000 or more to 12 individual buyers.

Lot 28 ARCTIC BRESIL proved the star of the show at the Tattersalls Cheltenham November Sale when selling to agent Gerry Hogan for £305,000. The imposing four-year-old son of BLUE BRESIL was placed second in one of the most highly regarded Maiden point-to-points run this autumn thus far at Tattersalls Farm. Consigned by Sean Doyle of Monbeg Stables he attracted bids from a number of parties but it was Gerry Hogan who struck the winning bid of £305,000 which was greeted by a round of applause from a packed sales ring. 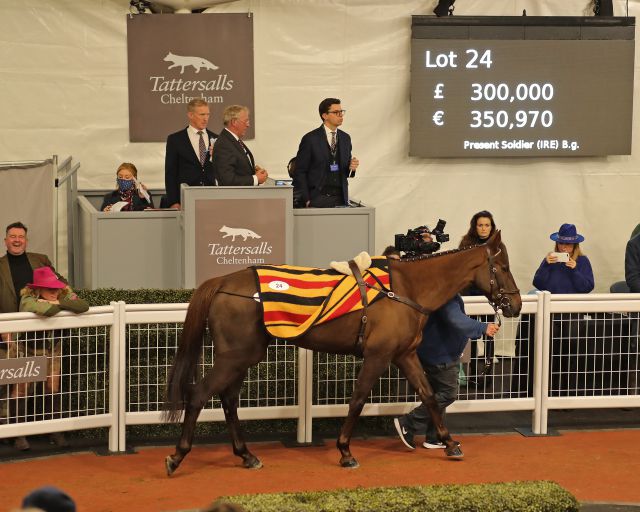 Lot 24 PRESENT SOLDIER the winner of the much talked about Tattersalls Farm Maiden was the second Lot of the evening to make £300,000 when going the way of Mouse O'Ryan and Gordon Elliott for KTDA Racing. The son of the late PRESENTING attracted bids from a number of players including underbidder David Minton but it was the Irish duo who came out on top. 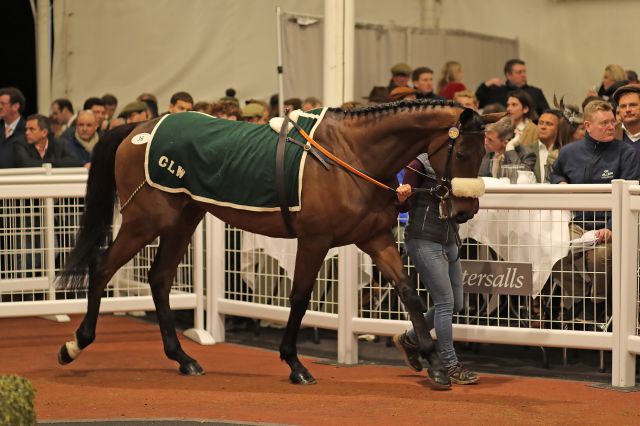 Lot 36 MASTER CHEWY who was placed third on debut in the same ultra competitve Tattersalls Farm Maiden last Sunday also realised £300,000 when selling to William Twiston-Davies. The succesful purchaser came out on top after a protracted bidding duel with underbidder Harold Kirk. Consigned by Pat Doyle's Suirview Stables he is by sire of the moment WALK IN THE PARK and will now go into training with Gold Cup winning trainer Nigel Twiston-Davies.

Lot 8 SMILING GETAWAY consigned by Donnchadh Doyle's Monbeg Stables had many admirers but it was James and Jean Potter who secured the well-regarded mare for £235,000 to see off underbidder Harold Kirk. The four-year-old daughter of GETAWAY was the impressive debut winner of her Maiden point-to-point at Loughanmore last month.

At the conclusion of the 2021 Tattersalls Cheltenham November Sale, Tattersalls Head of Sales Matthew Prior commented;

"This evening's sale was the first to be held alongside racing at Cheltenham since the onset of COVID-19 and the vibrancy and depth of trade has been remarkable, reaffirming the unique appeal of selling point-to-pointers at the home of British jumps racing. There has been a real sense of anticipation that has built towards the November meeting, and it was a pleasure to once again see many of the National Hunt fraternity out in force at the sale in recent days, which has been borne out in this evening's frenzied activity.

No doubt the outstanding success of the Tattersalls Cheltenham graduates continues to drive this demand as witnessed by the nine Cheltenham Festival winners in 2021 alone. The Irish and British point-to-point handlers are at the heart of this success story and as ever we are indebted to them for once again supporting the sale with a catalogue of real quality.