breaking renewal, whilst the median of £72,500 was the best recorded at this sale.

topper and the gelding (Lot 8) did not disappoint, sold by Denis Hogan’s Bohoerna Stables to Alex

has run once and won once – the four-year-old taking a Lisronagh maiden in fine style last weekend.

Derby Sale graduate, Mahon’s Way is out of Allys Bubble (Luso). She is a half-sister to the talented

at the Cheltenham Festival.

Bromhead. They very kindly gave us an order earlier this year after A Plus Tard won the Gold Cup. I

came here, it looked a great catalogue, so I thought there’d be some options.”

Of the individual, Elliott added; His physical, his pedigree and his performance at the weekend all

added up. I actually spoke to Norman Williamson, who pinhooked him as a foal, and he said he

couldn’t speak highly enough of him. It’s a great result for Denis and it’s great to have Cheveley Park

back in action in the ring.”

Consignor Denis Hogan recalled: “From day one we’ve loved him. I wouldn’t have bought him

without one of my friends Tadhg O'Shea, he’s based out in Dubai but he was with me at the sale.

“We failed [at the Derby Sale] on another horse from Williamson, but he told us he had another

worth us having a look at. He’s a great salesman and he’s a great judge of a horse – if he hadn’t told

me about him I wouldn’t have bought the horse. We went really over budget but thank God we did

because he’s paid us back.

He added: “I hope he goes on to win a Gold Cup because he’s definitely got the makings of a Grade 1

horse. He was good at the weekend but that’s only a fraction of what he can do, I think there’s a

load more to come. I’ve got to thank my team back in the yard because I could not do this without

them, they’re top class and they make my job very easy.” 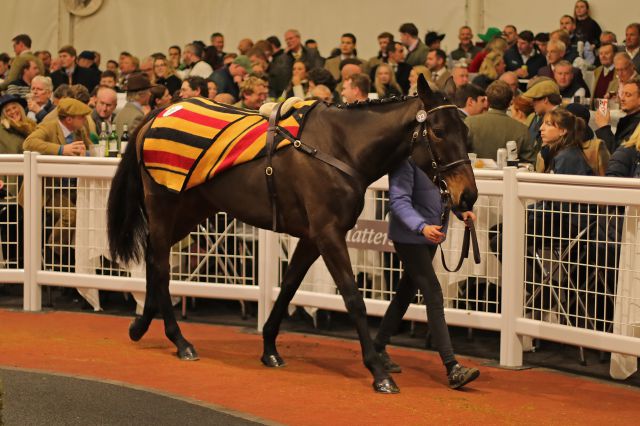 A four-year-old daughter of Workforce and out of the Old Vic mare Grangemore, she won at

Tattersalls on October 30 on her career debut for Murphy.

half-sister to Scarthy Lad (Magical Wonder), winner of the Tipperary Hurdle (G2) and third-placed in

“For me she was the standout of the sale,” said Elliott. “I was at the point-to-point the day she won

and she looked very good so, hopefully, she’s lucky now. We’re not sure who’ll own her yet but we’ll

get her home and get her sold. We’ll probably go for a bumper with her. There’s such a great

Murphy reflected: “I hope she’s very lucky for Gordon and they get lots of fun out of her. Her walk is

massive, she covers so much ground, she just finds everything simple.” 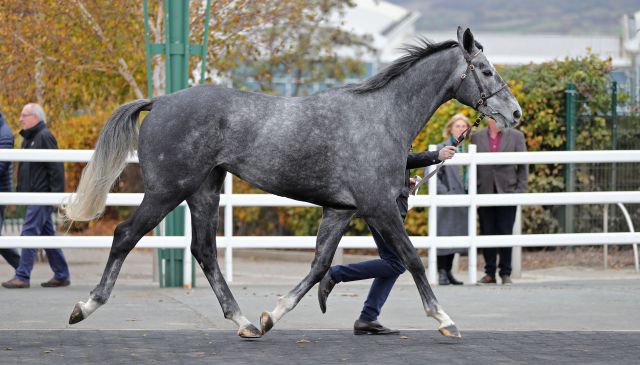 Tullyhill (Lot 22), winner of his maiden in October at Moira for trainer Colin McKeever and owner

Wilson Dennison, was purchased by Harold Kirk and Willie Mullins for £220,000.

“He’s from a proven source whom we buy a lot of horses off,” said Kirk. “Martaline is a top-class sire,

Wilson Dennison’s is a very good academy, and the horse came highly recommended by Colin

“Hopefully this horse can improve a lot. He’s a strong sort of Martaline and he moves well. We’ve

been lucky buying off this team before with horses like Yorkhill, Bellshill, Shaneshill, there’s a load of

them. He has been bought for an existing owner of Willie’s.”

By Martaline and out of the unraced Le Havre mare Ragtime, he is a grandson of Rouvraie (Anabaa),

It has been a very good day for Dennison – Hermes Allen, sold by Wilson Dennison and trainer

Nicholls for £350,000, was today’s highly impressive 9 length winner of the Grade 2 Ballymore

After the sale, Matthew Prior, Tattersalls Head of Sales, said: “It is a fantastic start to this Autumn’s

Tattersalls Cheltenham Sales. The quality of the horses offered at these Cheltenham sales continue

“It is wonderful to be back here at the home of jumps racing, courtesy of the Cheltenham executive

and the Jockey Club, and see once again sustained demand at all levels of the market.

“It was always going to be hard to match last year’s record-breaking renewal of this sale, but to

finish with a turnover over £4 million for a second year in succession, as well as a record-breaking

median, is a testament to the quality of horse on offer today.

“We now turn our attention to the Cheltenham December Sale, which has produced such luminaries

as the Grade 1 winners Shishkin, Sir Gerhard and Chantry House, with entries being taken now.