The evening’s session concluded an outstanding year for the Tattersalls Cheltenham sales, which has produced a record annual turnover of £19,797,000, the first-time turnover has broken through the £19 million barrier.

The cold winter’s evening at Prestbury Park was warmed up by a busy evening’s trade for the Tattersalls Ireland Cheltenham December Sale, a session saw a top price of £280,000 given for the point-to-point winner What’s Up Darling (Lot 41).

It is a case of lightening striking twice for the Costellos in the Cheltenham sale ring – at this spring’s Cheltenham April Sale, the family sold top lot Search For Glory for £200,000, the Fame And Glory gelding bought by Gordon Elliott Racing, also today's purchaser of today’s sale topper.

“I bought Search For Glory and What's Up Darling on the same day at farms just ten minutes apart,” recalled Costello. “They have both come here to this ring and they have made a lot of money. You never know what day your luck is in."

He added: “It is a relief as five years of hard work has gone into this horse, but I wouldn't be here tonight without the hard work of my sons.”

The gelding, who is out of the winning Flemensfirth mare Carries Darling and a grandson of Knock Down (Oscar), a Grade 3 chase winner in France, is one of seven lots bought today by Elliott and various connections.

Of this purchase the Cullentra House Stables-based trainer said: “He is a lovely horse, the video of his race looked very good, we have been lucky with the vendor, hopefully he is a nice horse going forward. I am not sure yet who will own him, we will get him home first." 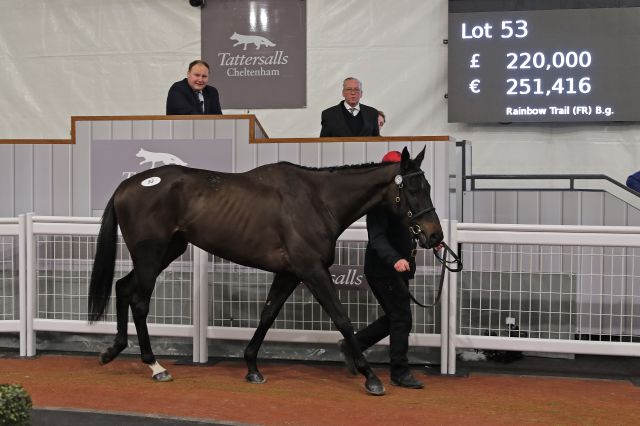 Elliott with agent Aidan O’Ryan also went to £220,000 for Rainbow Trail (Lot 53), a son of Davidoff sold by Donnacha Doyle’s Monbeg Stables. A 2021 Tattersalls Ireland Derby Sale graduate when bought by Doyle for €80,000 from Moanmore Stables, the four-year-old finished second last Sunday in a four-year-olds’ maiden at Corbeagh House.

Boston Town (Lot 35), sold by Milestone Stables, is another set to be joining the Elliott string, and was another signed by the trainer alongside O’Ryan.

The Flemensfirth winning four-year-old is out of Queen Of Mantua (Old Vic), a half-sister to the Aintree Grand National winner Ballabriggs. He is another 2021 Derby Sale graduate, bought at the flagship June store sale by Milestone Bloodstock for €50,000.

“He is for KTDA Racing, who a big supporter of Gordon’s,” said O’Ryan, standing with new owner Dave Page, who reported that KTDA stands for Keep The Dream Alive. “He is a gorgeous horse and came well recommended by Barry O’Neill and Colin Bowe. He is a four- year-old by Flemensfirth – he speaks for himself.” 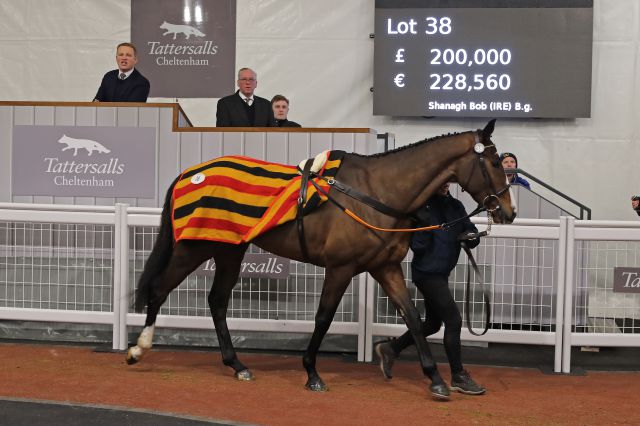 The pinhook result of the evening goes to the O'Donovan family – Shanagh Bob (Lot 38) was bought at the Tattersalls Ireland August Sale for just €10,000 and the son of Mahler was sold today for £200,000 to David Minton of Highflyer Bloodstock.

Son Chris O'Donovan was at Cheltenham to oversee the sale and rode the four-year-old to a career debut maiden victory last weekend at Ballindenisk.

"My girlfriend and I ride out in the morning for a variety of people, and do the horses in the evenings, sometimes we nearly need headlights on!” laughed O'Donovan, who was enjoying a best-ever sale ring result. “The whole family is involved, thank god it has worked out well, it is brilliant when it pays off.

Of the horse, who was led up tonight by O'Donovan's girlfriend Joanna Walton, he said: "From day one he has looked a good horse, we are thrilled. He has never put in a bad piece of work, from day one he has been a pleasure."

Successful purchaser David Minton, buying for trainer Nicky Henderson, said: "I have waited all day for him – I loved the horse yesterday, and I loved him even more today. His performance last Sunday was very good. Nicky won with a Mahler today so he is very up on the sire."

Minton rarely misses a nice horse sold at Fairyhouse store sale, at whatever the price, but the agent had a valid excuse: "He sold during Covid and we were not allowed to get to Ireland!”

After the sale, Matthew Prior, Tattersalls Head of Sales, said: “To achieve a record-breaking annual turnover at the Cheltenham sales in a year emerging from the shadow of COVID is a tremendous achievement.

“This evening we enjoyed a consistent and high-value session to round off the Tattersalls Cheltenham sale year – to sell 13 lots tonight for £100,000 or more represents the high standard of horses sold at Cheltenham, as well as the incredible demand for quality NH horses.

"We have to thank the continued and valued support from both consignors and purchasers.

"We look forward to following the progress of the sale’s graduates on the track and, hopefully, cheering them home up the famous Cheltenham hill.

“We wish you all a wonderful Christmas and we look forward to welcoming you back to the Cheltenham sales in 2023, starting with the Cheltenham January Sale on January 28, 2023.