The son of the late Fame And Glory won his point-to-point at Quakerstown last Sunday on his career debut and was sold by John Costello of Fenloe House in County Clare, bought by trainer Gordon Elliott.

“It is the first horse I have ever sold here,” said Costello, son of NH legend Tom Costello who famously produced six Gold Cup winners, including the three-time winner Best Mate.

“We have owned Search For Glory since he was a foal, we bought him privately from breeder Pat Connell – I also bought Ballyadam from him, and he was later sold by Colin McKeever at the Cheltenham November Sale for £330,000.

“My son Conor rode Search For Glory on Sunday and he won like a very nice horse. He is a super athlete from a lovely family. He was perhaps a bit slow to mature, but he is the first of our young horses to run as our horses have been off colour. I would think once he gets the sun on his back this summer he will be a beautiful horse next year.”

Of the decision to come to Cheltenham to sell, Costello said: “There was a little bit of interest in him after his win. There was this sale today, we have never been over, so we thought we would show him off to the public.” 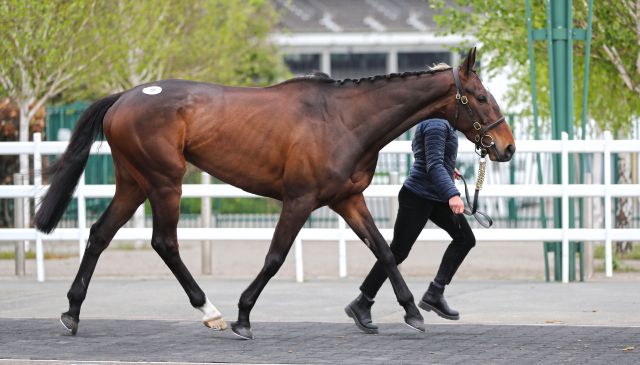 Kirk said of the five-year-old son of Presenting: "This looks a nice horse to go forward. He comes from a good family. He was very impressive when he won his bumper, Willie [Mullins] trains the second horse and we think he is nice.”

Breeder and owner John Hayes was at Cheltenham to see Shanbally Kid sell.

He said: "I liked him from day one, he is a good-moving horse, by a proper sire. I think he sold well enough today. We thought that the bumper route would suit, and it has all come right, he won only eight days ago – it has all happened so fast!

Hayes added: "I am mainly a farmer of beef cattle and suckler cows. I didn't think I'd ever get here – I was always hoping!" 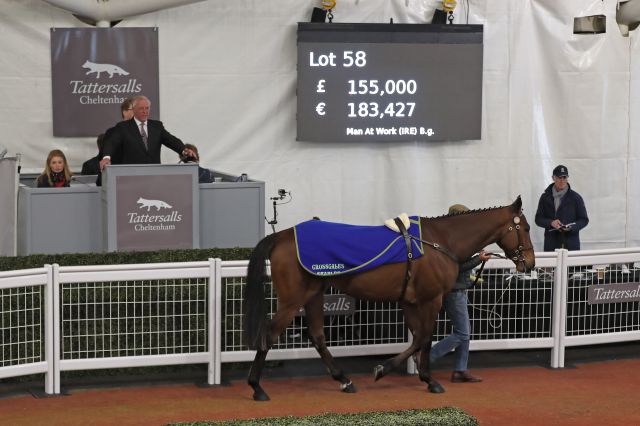 Man At Work (Lot 58) was a faller at the last at Lingstown in March in one of the best four-year-old point-to-points held in Ireland this season, and trainer David Pipe with Tom Malone went to £155,000 to ensure the horse is heading next to Pipe’s West Country yard.

"He has very good form, and he is a lovely individual,” said Pipe. “He is only four and will progress with a summer's grass. He looks an old-fashioned steeplechaser, and the form of the race is rock solid so hopefully he can go on like the others from the race.”

Man At Work, a son of Workforce, was trained and ridden by Benny Walsh, who was not at Cheltenham, his wife Jenny representing the County Wexford team.

"He is owned in partnership with Denis and Conor Hayes, who are from Waterford," said Walsh, who added: "The fall was not the plan, but it was obvious he was going to finish second. He was behind Barry The Butcher, who is highly regarded, and the eventual second-placed Croke Park and the third Ballybeg Boss have both gone on to win.

“We have enjoyed a tremendous Tattersalls Cheltenham sales season with some outstanding results both in the sale ring on the track.

“To achieve a seasonal record-breaking turnover is a wonderful result and a great recognition of the strength in depth of the Tattersalls Cheltenham sale division – we have sold 73 horses for over £100,000 across the six sales, which is a fabulous reflection of the demand from the NH buying bench.

“The season’s highlight in the ring has to be the record-breaking Cheltenham December Sale that produced an aggregate of £5,584,000, the highest turnover ever achieved by a bespoke point-to-point sale.

“Tattersalls Cheltenham graduates continue to shine at the highest level and since June 2021 we have enjoyed watching nine Grade 1 winners in action, such stars as Envoi Allen, Shishkin, Sir Gerhard, Chantry House, Bravemansgame and Ferny Hollow.

“We now look ahead to our inaugural Tattersalls May NH Sale to be held on Thursday, May 26th at our headquarters at Park Paddocks in Newmarket.

“Alongside the customary point-to-pointers and horses in training, the sale will feature a section of store horses as well as the part dispersal of Ann and Alan Potts Ltd. We look forward to seeing you all in Newmarket.”