Top Lot of £110,000 and 93% Clearance Rate are the highlights at the Cheltenham April Sale featuring the Bloomfields Dispersal

Heading trade at Tattersalls Ireland Cheltenham April Sale was Irish pointer Claimantakinforgan (Lot 68, pictured below), offered from Donnchadh Doyle’s Monbeg Stables draft, and knocked down for £110,000 to Anthony Bromley of Highflyer Bloodstock – the four-year-old son of Great Pretender, a recent winner at Loughanmore, is bound for Nicky Henderson’s Lambourn stable.

Sean Doyle, whose brother, Donnchadh, sold the sale topper, also enjoyed a good result when his four-year-old Monbeg Oscar (Lot 66, pictured below) was knocked down to Evan Williams for £90,000. Williams headed underbidder Tom George to secure the son of Oscar, who had won on debut at Oldcastle five days before the sale. Williams, who is based in Glamorgan, South Wales, also signed for the Colin Bowe-consigned Report To Base (Lot 52) following a bid of £85,000. That was a fine outcome for owner Rob James, who had ridden the four-year-old Westerner gelding to success at Dromahane earlier in the month, having bought him for €32,000 at Tattersalls Ireland Derby Sale in June last year. 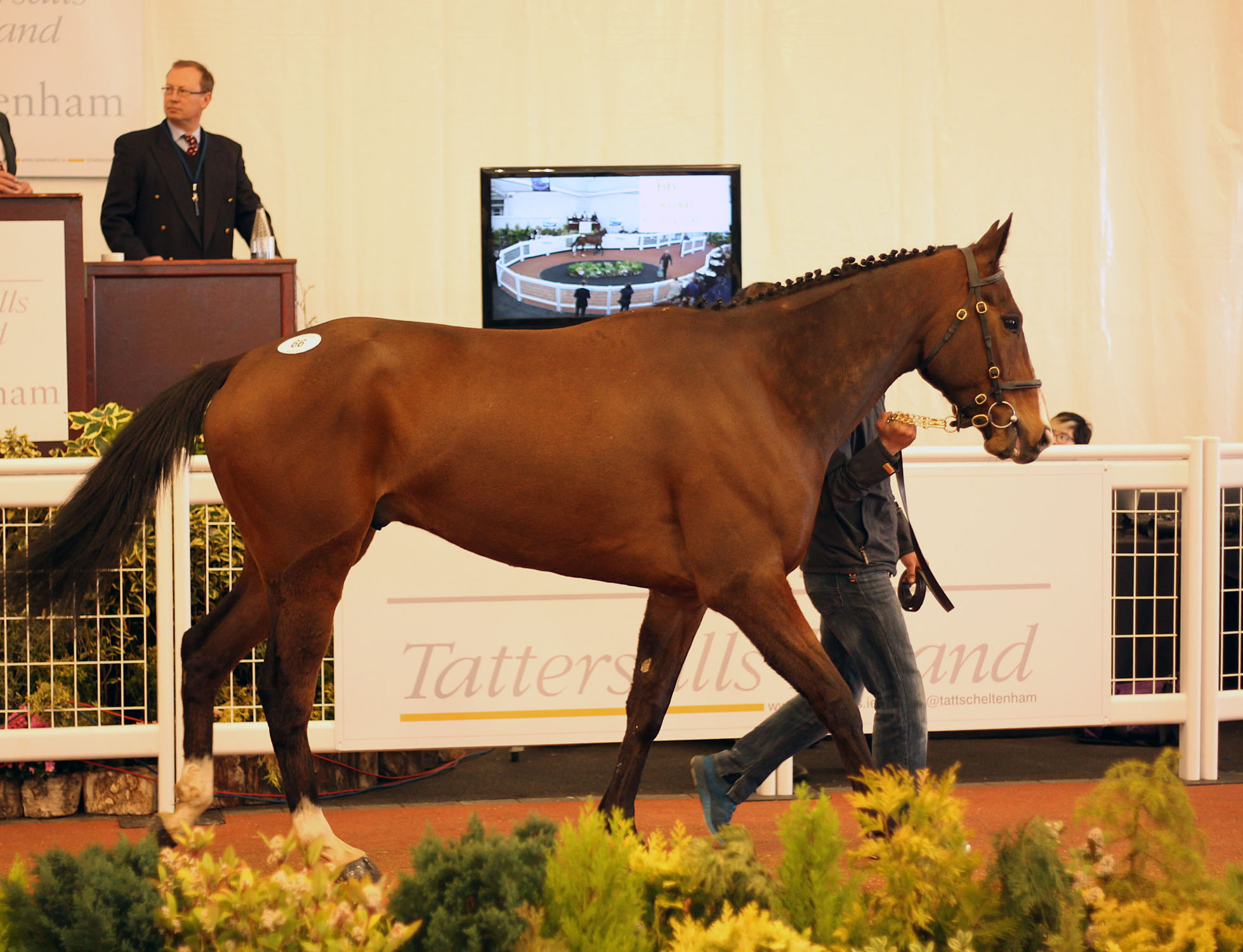 Wonderoftheworld heads to Hogan for £80,000

Gerry Hogan’s £80,000 offer gained him Wonderoftheworld (Lot 69a), a Beneficial four-year-old who had been second on his pointing debut for trainer John Paul Brennan. He too was a Derby Sale graduate, having been bought for €10,000 by his handler last year. Six-year-old Impulsive Star (Lot 60) came to the ring unbeaten after two starts for Cork-based Sean O'Brien, winning a point and then a bumper. A €7,000 Tattersalls Ireland August Sale purchase, he leapt in value to £78,000 when becoming another Cheltenham purchase by Anthony Bromley.

John Ferguson’s decision to disperse his Bloomfields stable at the home of jumps racing, after agreeing to a new and more time-consuming role within Sheikh Mohammed’s Godolphin operation, drew a large crowd to Prestbury Park. Headed by the five-year-old gelding Wenyerreadyfreddie (Lot 39, pictured below), who was sold for £95,000 to David Minton’s Highflyer Bloodstock en-route to continue racing from Nicky Henderson’s yard, all 47 Bloomfields horses found a new home. A five-year-old, Wenyerreadyfreddie was bought by Ferguson at Tattersalls Ireland Derby Sale in 2014 for €41,000. His third-dam, Ware Princess, produced top-class chaser Bradbury Star and the graded hurdle winner Prince Rudi.

Aqalim (Lot 25) was the first on offer – he made £55,000 to a bid from another South Wales trainer, Tim Vaughan, on behalf of racehorse syndicate specialists Select Racing – while the last to enter the ring also made a good price. This was London Prize (Lot 99), who is set for a dual-purpose role with Worcestershire trainer Ian Williams following his bid of £70,000.

Also set for racing on the flat and over jumps is smart hurdler Commissioned (Lot 32), who was knocked down to Middleham Park Racing’s Nick Bradley for £65,000. Bradley said: “He likes top of the ground so should be ideal for the summer. I expect Gordon Elliott will train him.”

Winning hurdler Berland (Lot 31), a four-year-old son of Cape Cross, is heading to America and a place in the Maryland stable of Elizabeth Voss after being sold for £50,000. Voss’s husband, Garry Murray, did the bidding, then said: “He’s for Laddie Mercks of The Fields Stable. The horse had a good rating on the Flat and John Ferguson recommended him.”

Ferguson was at Sandown races for Godolphin during the sale, but at its conclusion he said: “I’m incredibly grateful to everyone who supported the sale in such a wonderful way – and I hope all the horses are lucky for their new owners.

Commenting on the sale, Richard Pugh, Tattersalls Ireland Director of Horses-in-Training Sales, said: “We were delighted to be offered the opportunity to sell the Bloomfields dispersal and their clearance rate of 100% was something we are proud to have achieved. New buyers at any venue is a very encouraging step and we saw many new faces attend Cheltenham today and we hope to see them back again in the future. The overall clearance rate of 93% is quite exceptional for this type of sale and vendors noted a very solid market from start to finish. The dynamic of this season which saw a disjointed point to point season, a changed sales season and the Bloomfields dispersal mean that any comparisons to 2015 would mean little. Selling quality horses is something Cheltenham is renowned for and with a 93% clearance we achieved that yet again.

Whilst Bloomfields was something exciting to add to this sale as a once off we look forward to returning to the select sale in May here on Thursday 26th where a small select catalogue of high class horses will be offered. For Irish Point to Pointers the May sale has become a very important outlet. Of the 17 Irish Pointers sold for over £50,000 in 2015 – 16 of them were sold at Cheltenham. We look forward to another strong May sale next Month.”