Clondaw Cracker was offered by County Wexford-based Michael Goff, who bought him at the August Sale 15 months ago for €25,000, trained him to win a point-to-point at Glenbane last month, then realised £120,000 when returning him to the ring. The buyer was Roger Brookhouse, a long a supporter of Cheltenham Sales, and a racehorse owner and breeder who has horses in training on both sides of the Irish Sea. This contributed to an overall turnover of £1,616,000 and a robust clearance rate of 68% while the sale achieved an average of £42,526 and a median of £31,000.

Michael Goff, who handles some “25 to 30” pointers at his home in County Wexford, will not forget Clondaw Cracker (Lot 52) in a hurry. 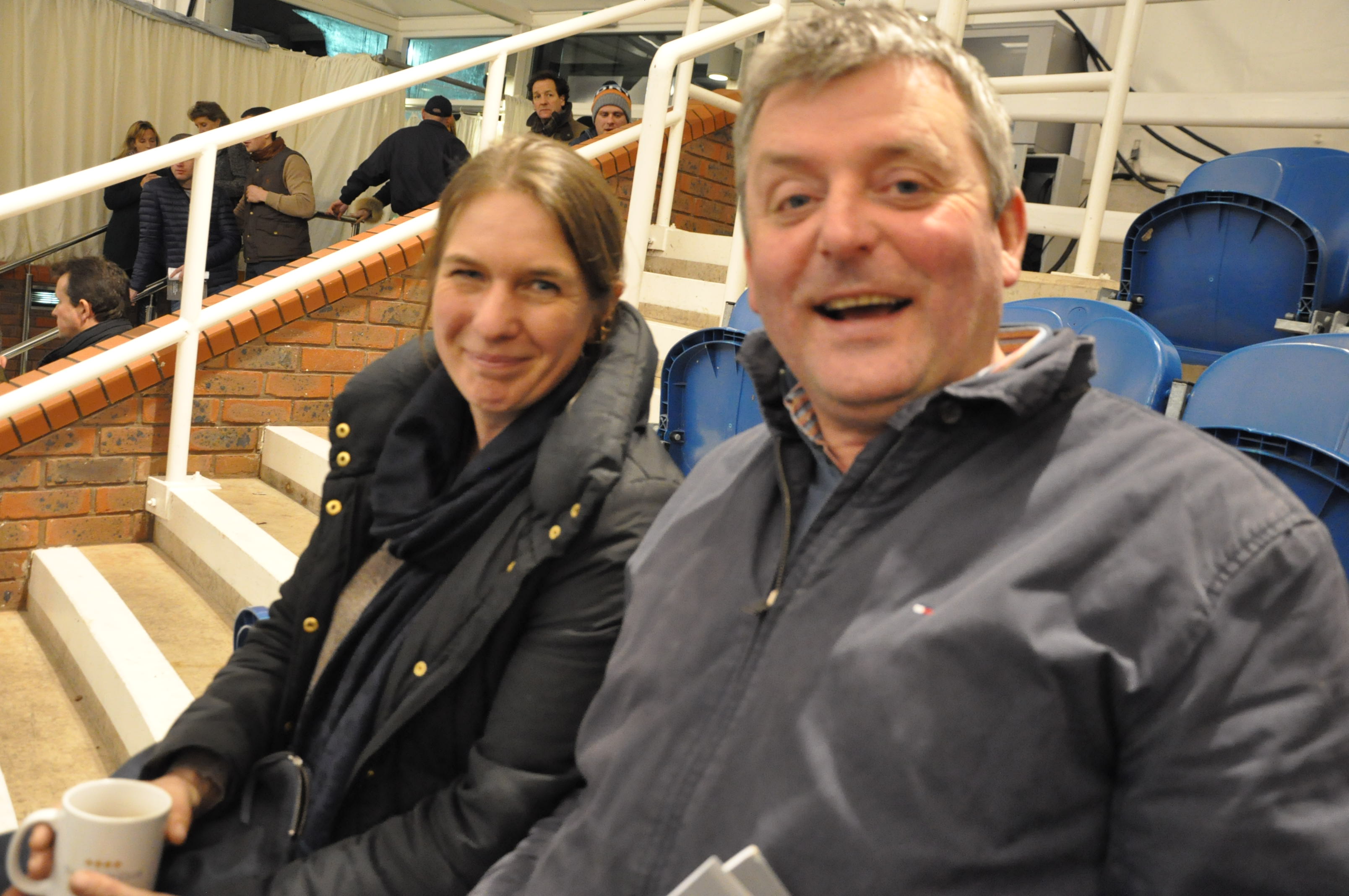 He saddled the son of Court Cave to win a four-year-olds maiden at Glenbane last month, then travelled him to Tattersalls Ireland’s Cheltenham Sales arena where a joust between racehorse owner Roger Brookhouse and bloodstock agent Mags O’Toole saw the horse knocked down for £120,000. Brookhouse gained the prize, while Goff could fondly ponder a profitable pinhook, having bought Clondaw Cracker for €25,000 at Tattersalls Ireland’s August Sale as a three-year-old store.

Goff, who celebrated his success with a cup of tea, said: “We wanted to run him at the end of last season, but a number of ours were sick so we were patient. He’s proved himself a very good horse and was given a high rating after his win. I hope he’s very successful for Mr Brookhouse, because he puts a lot of money into this game.”

Also looking on with a sense of pride at the result was John Flood of Boardsmill Stud, which is home to Court Cave. The 14-year-old son of Sadler’s Wells is steadily making a name for himself and will soon be represented on the track by bigger books of foals.

O’Leary on ascent with Hill

This time he offered four-year-old Keeper Hill (Lot 48), a Westerner four-year-old who streaked home in a Market Rasen bumper last month, then made £110,000 in the ring. The buyer was Highflyer Bloodstock’s Tessa Greatrex, who left Mags O’Toole in the underbidder’s spot.

O’Leary said: “He’s a lovely horse and we have always thought a lot of him – it’s been a good day, because I sold Baden here in May to Highflyer, and he finished second this afternoon [at Cheltenham] for Nicky Henderson’s stable.”

Greatrex said she had bought Keeper Hill for a client of her husband, Lambourn trainer Warren, and she added: “We like Westerner as a sire, and this one came highly recommended. He’s ready to go, and could be out at the end of January.”

Another horse who made a six-figure sum was Minella Beau (Lot 45), who so nearly missed out on the opportunity to showcase his talents when lining up in a point-to-point at Lisronagh on Sunday. A loose horse nearly carried him out at the fourth fence, and while he had ground to make up after the incident he went on to score in style for owner John Nallen and trainer Colin Bowe.

Anthony Bromley, a colleague of Greatrex’s at Highflyer Bloodstock, noticed the performance, and like the son of King’s Theatre when he saw him in the flesh, and it was his bid of £100,000 which proved decisive in the ring. Bromley, whose purchases frequently head to Britain’s leading jumps trainers, said Minella Beau had been sourced for a client of Ireland’s multiple champion trainer Willie Mullins.

He added: “It’s solid trade at all levels, and a good venue to buy a racehorse. We get plenty of winners from here, which is why we keep coming back.”

Nallen also traded Minella Fair (Lot 43), a full brother to smart chaser Time For Rupert by Flemensfirth. Second on his only start in a point-to-point at Mainstown last month, Minella Fair was snapped up by trainer Noel Meade for £72,000.

Nallen said: “I’m very pleased with both results – I bought the pair as foals at Tattersalls Ireland’s November Foal Sale [for €30,000 and €33,000 respectively].”

Pigeon pick of the Breezers

The three-year-old was knocked down to agent Tom Malone for £90,000 and will be sent on to join Paul Nicholls’ stable at Ditcheat in Somerset.

Malone said: “He was so sound on the breeze and looks a proper horse for the future; a real staying chaser.” Other breezers who sold well included a son Getaway (Lot 10), from the family of top hurdling mare Spirit Leader – he was knocked down for £30,000 to agent Kevin Ross, while Mags O’Toole, underbidder on the sale’s top lot, did not go home empty handed. Her purchases included a £40,000 son of Jeremy (Lot 16) from Mark Dwyer’s Oaks Farm draft. Staffordshire trainer Jennie Candlish also dipped into the breeze-up section to secure a Robin Des Champs gelding (Lot 22) for £40,000 – he was offered by Tom Keating of Nicholastown Stud.

At the conclusion of the sale Richard Pugh, Tattersalls Ireland director of horses-in-training sales, said:

“We have now held two sales at this venue, and vendors know it continues to be a venue they can trust to deliver strong prices again and again. It was good to see a top price of £90,000 for a breeze-up horse, the overall clearance rate for the sale was very strong, while the overall average is only slightly down on last year.

“The market retains faith in the quality of product that we offer at Cheltenham. We are grateful to our vendors and purchasers, and look forward to seeing them all again at the next sale, on January 30.”