County Clare-based Ronnie O’Leary has enjoyed some wonderful results in the sales ring with lightly-raced young bumper horses, and he did it again when trading Three Ways (Lot 41a) for £190,000, a sum that topped Tattersalls Ireland’s Cheltenham November Sale.

The four-year-old had scored at Carlisle on Monday this week, a performance that caught the eye of agent Tom Malone and trainer Kim Bailey, who pitched in to drive the price up. Malone came out on top and said his purchase would join Jamie Snowden and carry the colours of David Brownlow.

Malone said: “He was very impressive for a four-year-old on horrible ground at Carlisle. Dougie Costello who rode him recommended him – Dougie’s a good pal of mine, so this is a proper test of our friendship!

“We had to pay a bit more than we wanted, but the good ones are making plenty.” Snowden said: “He’s a lovely horse and you cannot fault the form. He and another four-year-old pulled a long way clear, and this one proved he goes on winter ground. He’s a horse we can kick on with.”

The highest-valued Irish pointer in the catalogue proved to be Bach De Clermont (Lot 33), a four-year-old knocked down to Wales trainer Evan Williams for £170,000 having won on debut at Loughanmore last month. 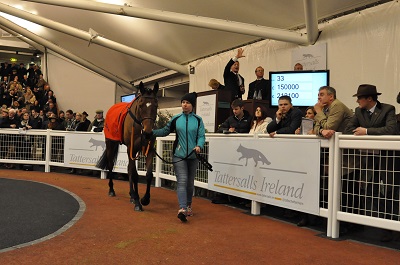 Brian Hamilton, who consigned the son of Della Francesca for a small syndicate that included his mother, Jennifer Maxwell, said: “I’m delighted – it’s very hard to tell what price they will make in this market, but everyone that saw him beforehand seemed to like him. He is a proper nice horse.”

Williams said he would be in no hurry with his purchase, who will race in the colours of William and Angela Rucker.

Another racehorse owner, Michael Buckley, bid in person for Reigning Supreme (Lot 47a), who had finished second at Maralin last weekend for a partnership involving top jockey Barry Geraghty and trainer Warren Ewing. The son of Presenting – a graduate of Tattersalls Ireland’s 2011 November Foal Sale – was knocked down for £130,000 and will join Nicky Henderson in Upper Lambourn.

Other six-figure sales included the very smartly-bred Golden Birthday (Lot 28), who was bought by agent Richard Knight with a bid of £100,000. Consigned by Liz Doyle, who saddled the son of Poliglote to finish runner-up in a Punchestown bumper recently, Golden Birthday had a very strong pedigree, being a half-brother to six successful horses, including multiple Grade One winner Golden Silver, a former star of Willie Mullins’ stable. 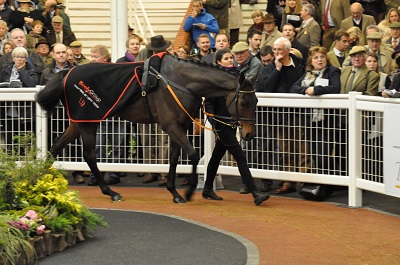 Harry Fry will train this one for owner Gary Stevens, while another Dorset trainer, Colin Tizzard, will handle Leg Lock Luke (Lot 35) who was bought by Terry Warner, the owner of many fine horses, including Champion Hurdle winner Rooster Booster. Offered by Eugene O’Sullivan, the five-year-old son of Indian River also made £100,000, a handsome gain on his €9,000 price when bought at Tattersalls Ireland’s August Sale last year.

Another graduate of that August Sale – and also of the November Foal Sale in 2011 – was River Wylde (Lot 46), who was bought by Anthony Bromley of Highflyer Bloodstock. Offered by trainer Thomond O’Mara, the son of Oscar leapt in value from €17,000 to £100,000.

Gloucestershire trainer Ben Pauling saddled his first Cheltenham winner during the afternoon when A Hare Breath won a novices’ handicap hurdle, and he stayed at the racecourse to purchase a son of Martaline (Lot 5) whose £70,000 price was best of the youngsters who breezed at the racecourse.

The three-year-old, from the family of very classy Oh Crick, Cristal Bonus and Othermix, was offered from Willie Slattery’s Meadowview Stables.

Richard Pugh, Director of Horses-in-Training Sales for Tattersalls Ireland, said: “It’s great to be here and to see the venue at its busiest. The number of six-figure lots is up, but we knew coming here that we had a very strong November Sale catalogue with plenty of quality among the four-year-old pointers right through to some very good bumper horses, headed by the top lot.

“I’ve attended this sale many times over the years, but to be here as part of Tattersalls Ireland and to see it from another side has been hugely enjoyable. There’s been a great sense of anticipation about the place.

“The reason Tattersalls Ireland are here is because we felt Cheltenham could deliver year on year, and on the evidence of this evening we have got away to a great start.”

The next Tattersalls Ireland Sale at Cheltenham will be held on Friday 11th December after racing.