The race winner Willmount (Lot 8), a four-year-old son of the exciting sire Blue Bresil and produced by Colin Bowe’s Milestone Stables, was the sale’s top lot selling for £340,000. He was bought by British-based trainer Neil Mulholland who saw off many interested parties, including agents Harold Kirk, Gerry Hogan and Eddie O'Leary.

"He is for owner Oliver Harris who has a few horses with us," said Mulholland. "The horse was one of the stand-out horses at the sale, and when I mentioned him to Oliver he said that number eight is his lucky number!

"The horse came highly recommended and I am delighted to have him on board. The sire is going places, and Oliver was keen to get him and stuck his neck out. We'll get him home, we'll treat him as a good horse, see if we can win a bumper."

Willmount, who is out of the bumper winner Youngstar (Old Vic), was bought as a three-year-old store last year for €46,000 by Bowe’s Milestone Bloodstock from Manister House Stud.

The session’s leading consignor Bowe, who sold three horses for an average price of £166,667, said: "He has always been a stand-out, he has a very good temperament, he handles soft ground and can quicken off it. Hopefully, he will be a good horse for next year.”

It is yet another good Tattersalls Cheltenham February Sale result for Bowe, previous consignor of the Grade 1-winning graduates Envoi Allen and Ferny Hollow.

Shannon Royale (Lot 12) finished two and a half lengths second to Willmount at Comea and the Walk In The Park gelding finished hot on the heels of his victor again selling today for £300,000, bought by Mags O'Toole. 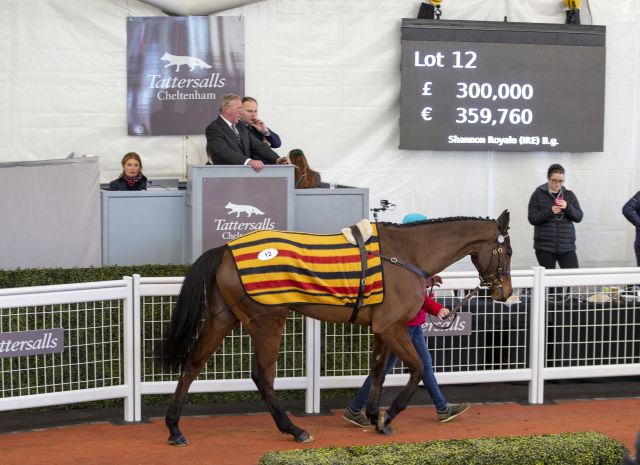 "He is a fine big horse, the sire is on fire, he had a lovely run against the top lot, he is a horse for the future, he won't be rushed and goes into training with Gordon Elliot for an existing client," said O'Toole, who added: "I loved the way the winner and this horse got away from the others, they quickened well. He is gorgeous, he has a lovely head on him.”

Consignor Denis Murphy of Ballyboy Stables, who spent €100,000 on the Walk In The Park gelding last year when buying him as a three-year-old, said: "He was the pick of the paddock when I bought him, and, as he has been an easy horse to train, he should go forward."

Despite Willmount and Shannon Royale going 12l clear of their field at Comea, Murphy admitted: "I was a little disappointed on the day to finish second, but Colin likes his horse a lot. Hopefully, the form will look good in time." 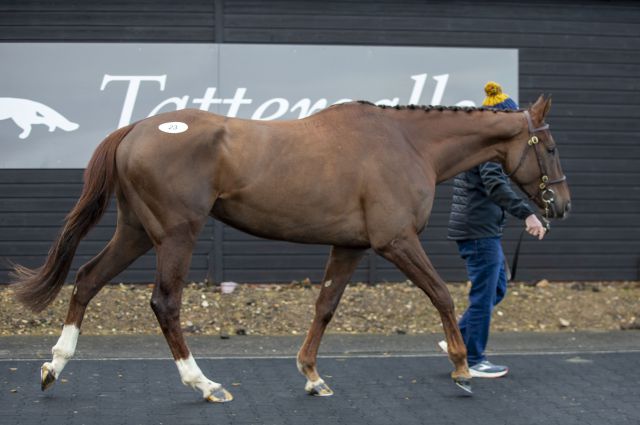 Captain Checkdown (Lot 23), a five-year-old by Getaway, was bought by trainer Tony Martin on behalf of Bloodstock Accountancy Services for £180,000. Sold by Andrew Latta’s Ballinakill Stables, the gelding won on his second career start at Ballinaboola at the beginning of February.

The preceding lot, Out Of Office (Lot 22), a Belharbour four-year-old-winning son of Shirocco, was sold by Rob James Racing for £160,000 to Welsh trainer Evan Williams buying on behalf of his long-term owners William and Angela Rucker.

The day’s busiest buyer was Highflyer Bloodstock, the agency purchasing three horses for a spend of £252,000.

“The Cheltenham February Sale, the source of such stars as the Grade 1 winners Envoi Allen, Asterion Forlonge and Ferny Hollow, is always much anticipated, given this is traditionally the first sale of the season to offer four-year-old Irish pointers.

“As always, our consignors have supported the sale producing a catalogue of note. They have been rewarded a top lot of £340,000, eight lots fetching £100,000 and more, and 27 individual buyers in action.”

“We now turn our attentions now to NH racing’s pivotal Cheltenham Festival week, which will see crowds returning for the first time in two years.

“No doubt we will be set for four days of top-class racing action, and we look forward to our flagship Cheltenham Festival Sale which takes place in the winner’s enclosure after racing on Thursday 17th March